The role of wiper die of pipe bender

The role of wiper die of pipe bender

When it comes to bending and wrinkling of pipes, the first reaction is the mandrel of bender pipe. In fact, there is another component: Wiper die. In the bending process, Wiper die should be coated with an appropriate layer of oil. But too much or too thick oil can still cause wrinkles in the area. In the use of wiper die at the same time, often use mandrel. The mandrel is used to keep the pipe from collapsing after it leaves the support point; The wiper die prevents wrinkles from forming when the pipe is bent. It works with the mandrel for better results. Some customers find that the arc of the pipe is deformed inside after bending or pushing the pipe. This is the problem caused by the lack of wiper die or the wrong installation position of pipe bender. Figure 1. 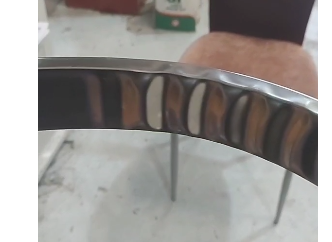 Figure 1 Bending and wrinkling of pipe

The shape of the wiper die is very important. The groove through which the pipe slides should be slightly larger than the outer diameter of the pipe. The value can be 10% of the wall thickness. The pipe should also be polished to prevent scratches.

The front end of the wiper die should be made very thin, so that it extends to the cut point of the bending die. If it is far from the cut point, it will lose its effect. If it is beyond the cut point, it will cause pipe extrusion because it is higher than the bending die. When installing and adjusting the wiper die, it is best to clamp the mandrel and the clamping die. At the same time, the pressure of the die of pipe bender hydraulic should be adjusted appropriately.