What is a Fiber Laser?

A fiber laser is a laser with rare-earth-doped fiber as the medium. Fiber lasers can be developed on the basis of fiber amplifiers: under the action of pump light, high power density is easily formed in the fiber, resulting in the "population inversion" of the laser energy level of the laser working material. Appropriately adding a positive feedback loop (forming a resonant cavity) can form a laser oscillation output.

2. The principle of fiber laser

As shown in the figure, like other lasers, the schematic diagram of a fiber laser is mainly composed of a pump source (LD), a working medium, and a resonant cavity. In fiber lasers, the working medium is a highly reflective mirror, 95% of the light source is reflected, and 5% of the light source is output to the total reflection mirror doped with rare earth elements.

First, the seed light source is generated by pump light, and the pump light is introduced into the gain fiber through the optical coupling system to generate stimulated radiation. In the working medium, the seed light source is magnified, but it cannot reach the intensity we need. At this time, the resonant cavity plays the role of oscillating light, and most of the amplified light reaches the right high mirror and is reflected back to the gain fiber so that the stimulated radiation light is amplified again in the gain fiber.

The light source is magnified again, the left side of the resonator is a total reflection mirror, which reflects the light source again. Between the two mirrors, each time the light source reflects, the laser will produce an amplification process. Until the light intensity reaches the threshold, a small part of the amplified light is output through the right half mirror and becomes laser light for people to use. The remaining 95% of the light continues to be reflected back to produce light amplification.

3. The structure of fiber laser

The adjustment of the traditional bulk laser resonator is complicated, and the production of the laser resonator requires a wealth of experience and assembly time. In contrast, fiber lasers can use modular fiber communication technology, and most people can simply assemble a stable laser cavity.

Although fiber laser is a kind of solid-state laser, due to the large difference in the shape of the medium, bulk solid-state lasers such as Nd: YAG are generally considered separately from fiber lasers. There are two types of fiber lasers, CW oscillation, and pulse oscillation. The former has high power and is mostly used for cutting and welding, while the latter has low power and is mostly used for micromachining and marking.

In the bulk solid-state lasers described so far, the coupling efficiency between the pump light and the laser light is low, and mode control is also difficult. Due to the adhesion of dust on the mirrors and lenses of the optical system, the deviation of the optical axis caused by the thermal and mechanical influence of the surrounding environment, etc. The output power is reduced and the beam quality is poor. In addition, with the increase of power, thermal effects such as thermal lens effect and thermal birefringence effect become obvious, so the amount of light beam is greatly reduced. Fiber lasers overcome these shortcomings of solid-state lasers and show some new features.

The optical fiber can be bent, so it can be small and light. In addition, the laser head can be made small, and flexible system updates can be obtained. Therefore, the purchase cost of the equipment can be reduced, and the installation location can be determined more flexibly.

As the power of solid-state lasers increases, the beam volume is greatly reduced due to obvious thermal effects such as thermal lens effect and thermally induced birefringence. Therefore, when developing bulk solid-state lasers, the cooling method must be carefully designed. On the other hand, the cooling method of the fiber laser can use air cooling within 100W, because the surface area/volume of fiber as a laser medium is more than 4 orders of magnitude larger than that of a rod-shaped medium of a solid-state laser, and it has excellent heat dissipation. 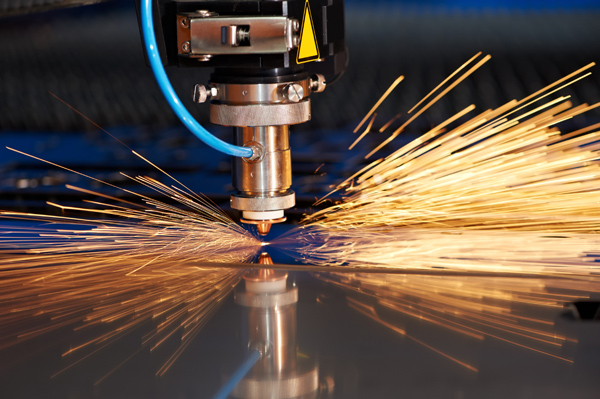 The laser light emitted by the optical fiber has a small NA (numerical aperture) and is easy to condense. Therefore, high power density and high-resolution processing can be achieved. In addition, when installed in a marking device, a small scanning mirror can be used, which can achieve low price and high speed of the entire device. By forming a built-in single-mode fiber, the simplification of the lateral film can be basically achieved.

Because the laser is emitted from an optical fiber, if the optical fiber is fixed, there is basically no spatial fluctuation of the beam. An all-fiber laser without a free-space optical system is not susceptible to dust adhesion and thermal and mechanical influences from the surrounding environment because it has no spatial optical components. In addition, in laser processing applications, compared with the most popular CO2 lasers, there are advantages and disadvantages, but fiber lasers can also use ordinary lenses to process objects for focusing.

As the gain medium of the widely used fiber laser, the rare-earth-doped silica glass fiber has the influence of a complex crystal field and exhibits a wide spectral energy level without a microstructure. Compared with YAG crystals, broadband optical amplification can be achieved. In addition, even if the gain per unit length of the fiber is small and the interaction length is large, sufficient comprehensive benefits can be obtained. Moreover, the pump light is encapsulated in an optical fiber, which can achieve high-efficiency pumping (optical-optical conversion efficiency is about 70%, and electrical-optical conversion efficiency is about 30%)

Because pump modules can be connected in series and in parallel, it is easy to increase the output power. CW fiber laser with a super high output power of 50KW (fiber propagation with a core diameter of 100μm) has been put into practical use. 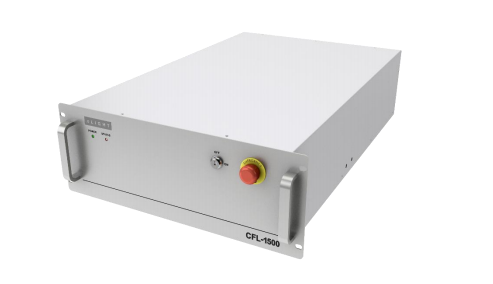 (7) Can be transmitted over long distances

The laser output of the fiber laser can be efficiently coupled into the transmission fiber. By using optical fiber for transmission, objects far away from the laser body can be processed.

The fiber core diameter is small, the interaction length is long, it is easy to produce nonlinear optical effects. It is not suitable for high-intensity pulse work, and the laser performance is limited. However, many new studies using this feature have also been widely carried out.

Pulsed fiber laser with its excellent beam quality, reliability, the longest maintenance-free time, the highest overall electro-optical conversion efficiency, the smallest pulse repetition frequency, the smallest volume, the simplest and flexible way of using without water cooling, and the lowest operation Cost has become the best choice for high-speed and high-precision laser marking.

A set of fiber laser marking systems can be composed of one or two fiber lasers with a power of 25W, one or two scanning heads that guide light to the workpiece, and an industrial computer that controls the scanning heads. The efficiency of this design is more than 4 times higher than the efficiency of splitting a 50W laser beam onto two scanning heads. The maximum marking the range of the system is 175mm*295mm, the spot size is 35um, and the absolute positioning accuracy in the entire marking range is +/-100um. When the working distance is 100um, the focal spot can be as small as 15um.

Fiber laser material processing is based on a heat treatment process that heats the part of the material that absorbs laser energy. The laser energy with a wavelength of about 1um is easily absorbed by metal, plastic, and ceramic materials.

Fiber laser forming or bending is a technique that changes the curvature of metal plates or hard ceramics. Concentrated heating and rapid self-cooling cutting lead to plastic deformation of the laser heating area, which permanently changes the curvature of the target workpiece. It is found that laser processing of micro-bending has higher precision than other methods and is an ideal method in microelectronics manufacturing. With the continuous improvement of fiber laser power, fiber lasers have been widely used in industrial cutting. For example, using a fast chopping continuous fiber laser to micro-cut stainless steel arterial tubes. Due to the high beam quality, the fiber laser can obtain a very small focus diameter and slit width, refreshing the standard of the medical device industry.

The application scope and required performance of fiber lasers in the field of laser processing are as follows:

In addition, with the development of UV fiber grating writing and cladding pumping technology, fiber lasers with up-conversion wavelengths of purple, blue, green, red, and near-infrared light have been widely used for data storage, color display, and medical fluorescence practical full curing light source in diagnosis. Fiber lasers with far-infrared wavelength output are used in laser medical treatment and bioengineering because of their exquisite structure, compactness, adjustable energy, and wavelength.